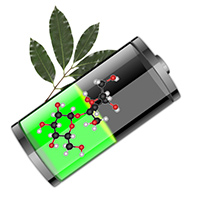 In order to promote the emergence of low-polluting, the team develops a research activity turned towards the design and development of new redox-active organic structures for electrochemical storage. In particular, the focus is on developing innovative materials for application as a positive electrode although the ultimate goal is to develop effective and affordable all organic batteries working in aqueous or non-aqueous electrolytes.

The necessity to integrate renewable electricity both on and off-the-grid coupled with the eagerness from the electric automotive industry and electronic manufacturers, have markedly increased the need for high-performance and affordable electrochemical generators and particularly those who are rechargeable. The world production of secondary batteries is therefore expected to keep on growing and still for a long time. As an example, the current market of lithium-ion batteries (LIBs) represents alone a production of billions of units per year. At large-scale perspectives a possible brake for the future could be related to the chemistries used until now that have finally not changed substantially in nearly 150 years. Actually, most of traditional batteries are based on the redox chemistry of inorganic species (mainly metals), which are often costly (even toxic), energy-greedy at the process level and intrinsically characterized by a scarce natural resource. Additionally, the increasing public concern about the environment has already induced stricter regulations in many countries regarding the spent batteries management, stating that batteries must be recycled (or properly disposed of), mainly to prevent them from being harmful to the environment and human health. For instance, the European directive 2006/66/EC (http://ec.europa.eu/environment/waste/batteries/) states first that at least 50% by average weight of battery waste should be recycled by 2011.

A couple of years ago, we underlined that redox-active organic compounds could play an important role in the forthcoming battery technologies including what we call now the “post Li-ion”. Indeed, different arguments can be put forward in favor of organic batteries. First, organics are built from quite naturally abundant chemical elements (C, H, N, O, S, in particular) and if properly designed, they can be generated from renewable resources (biomass). Second, the richness of organic chemistry provides great opportunities for finding novel and innovative electrode materials with specific properties. For an electrochemical point of view and in comparison inorganic species, this multiplicity of chemical combinations at the molecular level also gives rise an unequalled tool towards conjugated systems for both adjusting their redox potential and promoting multi-electron reactions. organics are typical fuels that can be easily consumed by combustion at medium temperatures producing heat (energy recovery) but also Li-based ashes able to be re-introduced into the battery production chain (when lithiated organic materials are used). A simplified sketch of the general concept is shown in Figure 1.

Within a collaborative research work (especially with F. Dolhem from LG2A, Amiens, FR), our interest has been focused for the past few years on the emergence of “sustainable” organic Li-ion batteries by developing specific organic structures able to react efficiently with Li. The main exploited electrochemical reactivity can be described by the following general scheme (R, R’ being potentiality integrated within the same cyclic structure):

To date, although several interesting organic materials notably based on carbonyl-containing cyclic structures have already been identified by several groups over the world the development of efficient and reliable organic Li-ion batteries is clearly in its early stage and much remains to be done. It is worth noting that it appears particularly difficult to find lithiated organic materials that can reversibly release lithium on cycling at high enough potential. Interestingly, we have recently put forward two key organic structures displaying quite good electrochemical performance especially an average operating potential at near 2.85 V vs. Li+/Li0 (Figure 2). By the way, we have also reported specific properties when using organic electrode materials such as a possible chemical rechargeability under air.

Finally, organic electrode materials can also accommodate anions upon charging bringing to us another playground in designing organic electrochemical storage systems including the development, in principle, of molecular ion batteries.