The so-called solid electrolyte interphase (SEI) between the negative electrode and the electrolyte of a Li-ion battery is known to monitor the overall battery behavior in terms of irreversible capacity loss, charge transfer kinetics and storage properties. Interfacial problems at positive electrode have been identified of paramount importance because they lead to performance degradation of the battery upon aging and cycling.

The chemical, physical and structural properties of the interfacial layer at positive electrode, and its modification upon cycling, are still poorly known. In order to understand interfacial problems on advanced positive electrodes of Li-ion batteries, controlling the long term life duration and intercalation / deintercalation kinetics, we need to characterize the positive / electrolyte interphase evolution upon aging/cycling.

MAS-NMR, as a local probe, is a useful tool to obtain informations on the chemical and structural local environment of the nucleus under observation (6Li , 7Li , 19F...etc), complementary to EIS measurements, to long range probe such as X-ray diffraction and surface probes such as XPS. We have successfully applied MAS-NMR to the observation of interphase layers on layered lithium manganese nickel oxide and lithium iron phosphate based positive electrodes of lithium-ion batteries [Jean-Frédéric2008, Marine2012].

The dipolar interaction between the Li ions within the host matrix and the paramagnetic transition metal (Ni2+, Mn4+) is too strong to be averaged out even under relatively high spinning frequencies MAS conditions. This leads to spectra not straightforward to analyze and it can be difficult to discriminate lithium ions inserted in the electrode material from lithium ion present in the interphase. Using a single pulse with a dead time longer than the T2 relaxation time of the bulk lithium signal allows observing only the « diamagnetic » Li at the surface [Ménétrier 2004]. This surface diamagnetic layer displays also a strong interaction with the paramagnetic bulk but no hyperfine Fermi-contact shift (due to orbitals overlapping) is detected and thus, no chemical bond between the Li in the surface layer and the bulk of the electrode active material. In fact, the observed line is extremely broad and an important set of intense sidebands is observed due to the strong paramagnetism and the proximity of the bulk of the paramagnetic material and therefore, contains informations on the proximity/intimacy of the surface layer (or SEI) with the active material [Dupré 2008, Dupré 2009]. 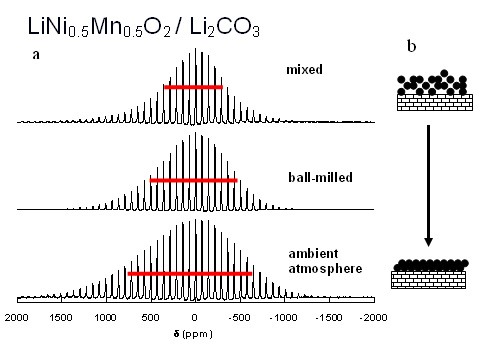 The use of 7Li, 19F et 31P MAS NMR, has been made quantitative through the implementation of empirical calibration. Thus, it enables to estimate the absolute amounts of the various species contained in the interphase and comprising at least one of these elements. For instance, quantitative comparison of the integrated intensities of 7Li and 19F NMR signals indicated that all Li nuclei were involved in LiF for short contact times of the LiNi0.5Mn0.5O2 with LiPF6 based electrolyte. The subsequent stabilization of the amount of fluorine while that of lithium still slowly increases, supports the formation of non fluorinated species (and probably organic) lithiated species for extended exposure times [cuisinier 2012].

Figure : Evolution of the amount of Li and F nuclei deduced from quantitative NMR measurements for various contact time of LiNi0.5Mn0.5O2 with LiPF6 (1M in EC:DMC).

In the case of LiFePO4 a process of dissolution at low potentials and precipitation at high potentials of lithiated species has been noticed using combined 7Li and 19F MAS NMR In this case, the variation of lithiated species are mostly due to organic product, confirmed by the consistent variations of 1H NMR intensities. Less voltage-sensitive salt decomposition products such as LiF, LixPFy and LixPOyFz compounds seem to be trapped in the interphase. Evolution of the NMR T2 relaxation time combined with TEM/EELS suggests that newly formed surface species stack on the top of the existing interphase rather than further cover the active material surface, hence preventing the blocking of charge transfer between the electrolyte and the active material, allowing us to propose a scenario for the interphase formation and evolution [Martin 2013]

Figure : Schematic view of the interphase pictured on LiFePO4 at the charged and discharged states along cycling in conventional LiPF6 1 M in EC:DMC (1:1) electrolyte.

These results show that the overall electrochemical behaviour of an electrode material of lithium battery can be controlled surface phenomena [Oliveri 2008, Dupré 2011]. Such correlation between surface chemistry and electrochemical behavior were confirmed in the case of the study of LiFePO4 exposed to ambient atmosphere before cycling [Martin 2013, Cuisinier 2013]. Understanding the behaviour of those surface layers and their influence is crucial in order to propose and develop a scientific research aiming at enhancing the electrochemical performance of Li battery materials, using electrolyte additive [Cuisinier 2012] or protective coatings [Cuisinier 2013] that are able to modify parasitic reactions at the electrode/electrolyte interface.

This approach has been more recently extended to other materials such as high voltage spinels (LiMn1.6Ni0.4O4) [Wang 2012] as well as negative electrode materials including Li4Ti5O12, silicon based electrodes [Oumellal 2011] and low potential tin and antimony alloys. In the particular case of silicon nanosized materials, 19F NMR analysis shows that the degradation of lithium salt occurs only in the first cycles and accounts for a negligible part of the irreversible capacity loss. Combined 7Li and 13C NMR analysis confirms that a significant part of the irreversible capacity loss is due to the degradation of the carbonate solvents with the formation of non-lithiated carbon species as oligomers or polymers therefore allowing explaining the failure mechanisms of silicon-based electrodes [Delpuech 2013].