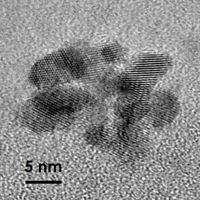 This email address is being protected from spambots. You need JavaScript enabled to view it.

Mercury, from natural or industrial origin, is one of the most toxic inorganic contaminant for living organisms, despite its relatively low concentration in soils and aquatic environments. Its methylated form is extremely neurotoxic as a result of its bioaccumulation in the food chain. However, the high thiophilicity of divalent mercury (Hg(II)) reduces methylation rates via the formation of strong complexes with thiol groups in organic matter of the soil and precipitation of mercury sulfide minerals (HgS) in anoxic conditions. In this context, we participate to the study of the mercury speciation in the contaminated soils, and evidenced by transmission electron microscopy (TEM) the formation of HgS nanocristals in contaminated soils, including in the oxic upper horizon.

Speciation of mercury in contaminated soils

While the precipitation of Hg(II) from sulfide was widely accepted, XANES spectroscopy measurements and quantum chemical calculations demonstrated that HgS also can form directly from organically bound Hg-thiolate complexes in oxygenated conditions. XANES spectroscopy measurements of dissolved organic matter (SOM) with 200 ppm added Hg(II) and aged for six months in the dark and aerated solution showed that they progressively evolved in mercury sulfide. The 75% transformation rate is in agreement with the ratio between both mercury phases found in the upper horizon of the Oak Ridge TN USA contaminated soil, suggesting a similar precipitation mechanism with no microbial activity requirement.

Nanosized HgS particles were indeed observed by high-resolution transmission electron microscopy (HRTEM) impairing the long going paradigm in geochemistry that sulfide ions are mandatory for the formation of metal sulfide.

Figure 1a illustrate a HgS aggregate in the center of a carbon contamination trace from the focused electron beam left after the high magnification observation (Fig 1.b). The high resolution (HRTEM) image of the aggregate and the Fourier transform on one of the nanograin (Fig 1c and inset) demonstrate that the aggregate is composed of .3-5 nm metacinabar β-HgS nanocristals of cubic Fd-3m structure.

However, the scarcity and nanometer dimension of the HgS crystals render their localization and fine TEM characterization extremely challenging. Detecting and imaging rare HgS nanoparticles burried in an organic matrice by X-ray emission spectroscopy (EDS) on conventional TEM machine was difficult because of the organic matrix rather unstable under the electron beam the signal. In addition, the X-ray signal was low and the analytical resolution rather poor and, restraining the identification of the HgS precipitate to the strong scattering contrast of Hg atoms.

New TEM techniques, such as STEM-HAADF that amplify the electron contrast of heavy elements such as mercury, allow these experimental difficulties to be partly overcome. Coupled with image Fourier transform analysis and STEM-EDX mapping, it is possible to image the distribution of mercury in the organic matrix and charaterise more precisely its chemical and structural state.