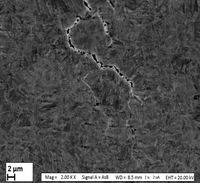 During welding operations damage may occur in the materials which can render the parts unusable. We have expertise in the damage to metallic materials during shaping, particularly in the case of shaping by welding. Our studies aim to understand the phenomena inherent in the appearance of these defects and to propose solutions to our industrial partners. These solutions can be either metallurgical or actions on the welding process.

The first example detailed below is an understanding of the occurrence of cracks when welding high tensile zinc coated steels during resistance welding. The proposed solution was a metallurgical solution. This is the thesis work of Renaud Frappier carried out as part of a CIFRE thesis with Arcelor Mittal.
The resistance spot welding process is a process widely used mainly in the automotive industry, but also in household appliances or aeronautics. It is a relatively simple process (Figure 1) but whose speed of execution (a few tenths of a second) and location of the welded point (between the two electrodes and more exactly between the two sheets to be assembled) do not allow very observations. easy.
Figure 2 shows the location and size of the cracks that can be found during resistance spot welding of zinc coated very high yield strength sheets.

We related the parameters of the welding process (Figure 3) to the appearance of cracks. In fact, the latter appear in the most stressed areas of the welded point (bottom of the electrode, edge of the indentation), for the highest surface temperatures and therefore the highest intensities and in the presence of zinc at the liquid state (between the melting and vaporization temperature of zinc). The probability of a crack appearing is very great when the metal in contact with liquid zinc is of austenitic structure and highly stressed

High temperature tensile tests (Gleeble thermomechanical machine tests) showed that, whatever the high yield strength steel, there was a loss of ductility (Figure 4) as soon as the coated metal was brought to temperature above AC1 up to the evaporation temperature of the zinc. On uncoated materials, this ductility hole is non-existent.

We observed the path of zinc in the austeno-austenitic or ferrito-austenitic grain boundaries (Figure 5).We were thus able to determine a pattern of the appearance and propagation of cracks during the welding operation.

Following this study, we were able to offer the manufacturer not only a "process" solution (not a priority) as well as a materials solution by proposing new grades of steel less sensitive to this cracking by liquid metals. The second example is based on tests of brazing aluminum parts with liquid galium.This example is taken from the thesis work of Edouard FERCHAUD carried out as part of the ANR GALLUMINUM project.

In fact, gallium forms alloys with friendly aluminum and is also a powerful weakener in aluminum alloys. Gallium segregates in grain boundaries and this gallium segregation leads to an intergranular liquid film above the gallium melting temperature: 30 ° C. This leads to irreparable intergranular decohesion (Figure 6b). If one brazes aluminum with gallium at low temperature (below 100 ° C), the gallium remains in the grain boundaries, thus leading to an intergranular rupture which is generally quite far from the brazing zone (Figure 6b). By using suitable brazing parameters (time and temperature), it is possible to produce non-weakened assemblies (Figure 6a) for which the bond between the two parts is almost perfect (Figure 7) without segregation of gallium in the grain boundaries. unlike the micrograph presented in Figure 8. We have shown during this study that, when the parameters are judiciously chosen, gallium no longer segregates in the grain boundaries but diffuses into the volume of the grain where it is stable there.