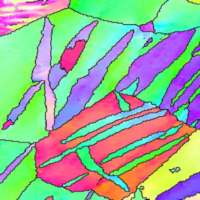 Superelastic metastable titanium alloys may be designed using highly biocompatible elements such as Mo, Nb, Zr, Hf, Ta only. Numerous new alloys were recently developed; their performances are now close to those of nickel-titanium alloys which contain a high amount of nickel which is not biocompatible.

This stress-induced martensitic transformation is followed by {112}<111>β mechanical twinning which is observed in β phase once the stress is released. Analysis of the deformation mechanisms sequence shows that twinning actually occurs in α’’ phase: {112}<111>β actually correspond to {110}<110>α’ which reverse into β phase when the stress is released as shown on Figure 2.

Schmid factor analysis shows that observed twins are activated in the opposite direction to that in classical {112}<111> in body-centered cubic structures. Indeed, such an operation, if it occurred in β phase would require shear and a very high shuffle, resulting in a very high activation energy of the phenomenon. However, the previous stress-induced martensitic transformation lowers both shear and shuffle involved in the twinning operation. The activation energy is reduced, making that mechanical twinning system possible to activate.