Thursday, 09 February 2023
HomeTHEMESSpectroscopy and modelingNMR and modeling of NMR spectra

The MAS NMR is an extremely efficient local probe for information on local environments of probed nuclei (6,7Li, 19F) and, as such, this technique is often combined with the X-ray diffraction in the study of materials for energy storage. Depending on the type of material under study (diamagnetic or paramagnetic insulating compound or metallic compound), analysis of NMR responses and their interpretation may not be a trivial task. The use of modeling can be very useful. As part of collaborative projects we have developed over several years a research activity around modeling NMR parameters by DFT tools.

Our progress in this area can be directly used to analyze the chemical shifts of 6,7Li or 19F at the interfaces of electrode materials or to interpret the NMR Fermi contact shift of 6,7Li inserted in positive materials.

Under the regional project RMN3MPL (2009-2013), we worked with colleagues from the University of Le Mans and CEMHTI ( Orleans) on modeling 19F chemical shift in diamagnetic crystallized compounds using the GIPAW method. This approach is a continuation of the work initiated during the Lionel Trulfandier PhD thesis (2004-2007) where we were interested in modeling, by using the GIPAW method, NMR parameters of transition metals (49Ti, 51V, 55Mn). Regarding 19F, a demand exists on the side of the modeling to establish correlations between the screening parameters calculated by the GIPAW method and the chemical shift tensors measured by NMR. Of course, the idea behind this modeling aspect was to move towards an unambiguous assignment of the NMR signals of 19F in crystalline compounds in order to improve the interpretation. Our first paper in this area, a rather methodological work,[Sadoc 2011] has allowed us to establish a very general law that can be used with a PBE exchange correlation functional.(see Figure) This work is now well quoted by the international community and was further used in the RMN3MPL program through applications on various compounds.[Biswal 2012, Rollet 2012, Biswal 2013] Under the BACCARA project, the knowledge acquired on these aspects of NMR modeling will be used for the study of interfaces and SEI. 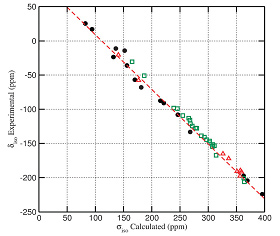 Figure showing a spin density map for the compound LiFePO4OH together with the spin transfer mechanism proposed to explain the NMR Fermi contact shift.

In parallel of this work, we were interested in the ANR LoCharATMO project (2009-2012), in modeling NMR parameters of paramagnetic materials. This work was done in collaboration with colleagues from the ICMCB (Bordeaux) and ENSCR (Rennes). NMR is indeed used to probe local environments of lithium atoms inserted into the materials but, quite often, the paramagnetic nature of these positive materials makes the previous analysis ineffective. The NMR shift observed in this case (Fermi contact shift) is directly related to the spin momentum transferred to the nucleus. We have developed a method based on DFT methods to quantify this Fermi contact shift.[Castets 2011] The performance of the exchange and correlation functional were also evaluated for the accurate description of the polarization mechanism.[Zhang 2012] The last part of this study consisted in analyzing these transfer mechanisms from band structure and spin density maps.[Castets 2012] 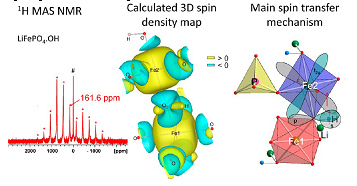 Figure: Correlation established between the chemical shifts measured for 19F in various fluoride and the shielding tensor iso values calculated by the GIPAW method using the PBE functional.[Sadoc 2011]