Thursday, 09 February 2023
HomeTHEMESSpectroscopy and modelingContribution of synchrotron radiation to characterization of electrode materials for Li batteries and supercapacitors

In this topic we use the potential of new synchrotron sources in terms of temporal and spatial resolution to characterize the structural (XRD) and electronic (XAS) transformations of the electrode materials during battery operation. Operando mapping of electrodes were performed for the first time with a spatial resolution of 16 μm2. We are able to follow continuously the oxidation/reduction process for each chemical element in the positive electrode.

In HE-NMC lithium batteries, we have shown that Ni and Co are oxidized only in a first step of the charge, instead of Mn which is oxidized continuously all along the process. In new supercapacitor material FeWO4, we demonstrate the pseudocapacitive behavior and the role of iron in the redox process. We have significantly contributed to the scientific case of the new beamline ROCK at the SOLEIL Synchrotron source.

To optimize the electrochemical performance of the electrodes for Li batteries (LiB) (or Na), and supercapacitors, it is important to characterize these materials in operating conditions (operando). To reach this goal, we use the potential of new sources of synchrotron radiation associated with X-ray diffraction (XRD) and X-ray absorption spectroscopy (XAS), to characterize the structural and electronic transformations of electrodes materials during operation and relaxation process. To do this, in the context of the ANR PULSSE (2007-2010), an electrochemical cell suitable for synchrotron measurements has been developed. It can reproduce faithfully the electrochemical behavior of the electrodes. The combined use of four beamlines at synchrotron SOLEIL (LUCIA, ODE, CRISTAL and SAMBA) allowed getting high temporal and spatial resolution data, compatible with the operando mode. XRD and XAS data have been collected with a temporal resolution of a few seconds, and a mapping of the electrode with a spatial resolution of 16 μm2 was also performed.

In the framework of the ANR PULSSE, we studied the cycling behavior of LiFePO4. A heterogeneous behavior in terms of state of charge (SOC) was detected (see figure 1) during cycling, some parts of the electrode having a different SOC than that expected from the electrochemical curve. 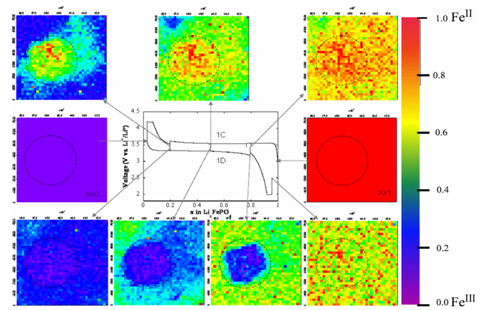 This behavior depends on the particle size, electrode formulation and C-rate. This heterogeneity can be related to the limitations in the electronic and /or ionic transfer into the percolating network of the composite electrode.

This cell was also used to analyze by operando DRX on the CRISTAL beamline, the influence of the dynamics on the structural behavior of a material for Na battery (NaFePO4). We have surprisingly discovered that unlike Li batteries, the metric and the composition of both compounds, lithiated and delithiated, vary simultaneously with their proportion during phase transformation. A major consequence of this finding is the significant reduction of the volume difference of the phase at phase front. If our results are confirmed for other materials, it would seem that Na batteries have an advantage over LiBs which could compensate for the lower efficiency of the SEI (Solid Electrolyte Interphase) and the larger size of the Na+ cation.

Having demonstrated the potential of synchrotron radiation in materials characterization during operation, we have extended this approach to other composite electrode materials. Thus, in the context of the ANR ALISE (2012-2016), XRD and XAS operando were used, among other techniques, to deepen the understanding of the structural and electronic mechanisms limiting the performance of HE-NMC electrode (overlithiated layered oxides of nickel, manganese and cobalt). For example we have demonstrated that nickel is oxidized in the first part of the charge and manganese is continuously oxidized all along the charge (Figure 2).

These studies led us to participate in the project of the new beamline ROCK, at the SOLEIL synchrotron. This equipment is dedicated to the XAS study of kinetic reactions. It has been used for the operando characterization of iron tungstate FeWO4, a promising new electrode for supercapacitors. The results show an evolution of the iron oxidation state (FeII/FeIII) while cycling, confirming the iron-related pseudocapacitive behavior of FeWO4. At the same time, no evolution was observed on the tungsten oxidation degree.