Thursday, 30 June 2022
HomeFirst realization of a single-component artificial neuron at the IMN 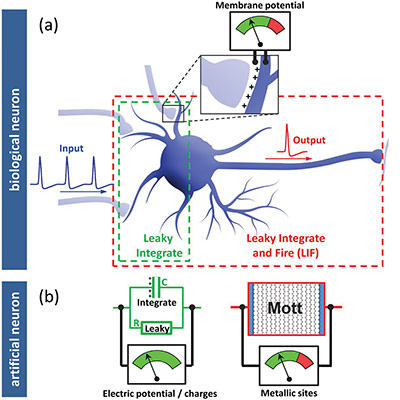 A few weeks ago, researchers of the PMN team published in the journal Advanced Functional Materials an article entitled A Leaky-Integrate-and-Fire Neuron Analog Realized with a Mott Insulator, which describes the first realization of a mono artificial neuron -component using a new property of Mott insulation.

Today's computers, built according to a so-called Von Neumann architecture where processors and memory are separate blocks, remain overwhelmed by the human brain in several major classes of problems. The latter works on a very different architecture, based on a network interwoven with neurons and synapses. A promising way is to develop a "neuromorphic" computer, consisting of neurons and artificial synapses. Whereas artificial synapses have already been realized as mono-components, the present realizations of artificial neurons still require the use of complex electronic circuits.
The discovery of this dipole lacking in IMN is therefore a new step towards the material realization of a "neuromorphic" computer imitating the architecture of the brain. This work was patented in 2014 and resulted in the Neuro-Mott regional scientific wager to produce the first miniaturized devices.